The DFL Senate Caucus met yesterday and the Carpenter’s Union Hall in St Paul to select their new leadership team. The wisely picked a pragmatic, thoughtful and seasoned veteran in Sen Kari Dziedzic (DFL-60, Minneapolis). We understand this was a one ballot contest. 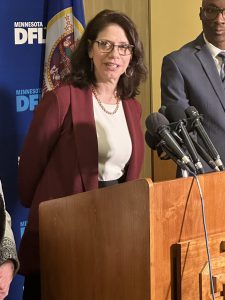 It is worth noting our call for Dziedzic as far back as February https://checksandbalances.com/in-the-aftermath-of-lopez-franzen/ and in addition we were the only source to put forward Champion’s name for Senate President.

Members of the press raised an issue of the perceived metro centric perspective of the selections. To which Dziedzic pushed back saying all of the positions had not been decided upon, specifically the Deputy Majority Leader, which is still pending and the Assistant Majority Leaders, which have been chosen but a list is not yet available.