Governor Tim Walz (DFL-MN) was a social study teacher and not a math teacher, so its not all surprising to learn that the numbers in his budget don’t add up well for the economically disadvantaged and this is in large part because there is not a shared sacrifice with all income brackets and DFLers are too timid to create a truly fairer system. 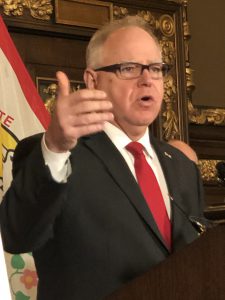 From an analysis of his own Department of Revenue, Minnesotans on the bottom half of the income scale will see an average tax increase of 9.9% while the upper half will only see a 5.9% increase. This structural differential is something the former social studies teacher can better understand. The burden of taxation falls harder on the lower income brackets than it does on the higher ones because a dollar is taxed differently in each instance. If every dollar from wage income to investment income were taxed equally then disparities like this would not exist.

When Governor Mark Dayton (DFL-MN) proposed a restoration of the fourth tier of income tax he bent this inequity, but Republicans decried it as a tax grab. Now, Walz can see the full impact of his proposals and maybe it will embolden him to be more aggressive in support of his own agenda and more receptive to changes that come out of the legislative process now that this impact in known.