Yesterday’s, press conference by the Republican Senate majority discussed much of what they had done in the past legislative session and more what they would like to do during the 2020 session. The issues and initiatives advanced by Senate Majority Leader Paul Gazelka (R-09, Nisswa) were targeted right toward the Republican rural, conservative fiscal and social base. 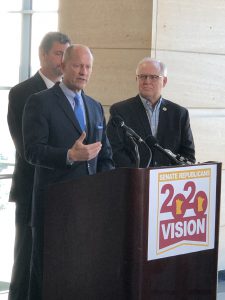 He began his presentation highlighting the $650 million in tax reductions for the state’s middle class, passed in the last budget and called for a complete exemption for all Social Security payments from state income tax. He also discussed state conformity from $20,000 annually to the federal amount of $200,000 for depreciation of Agricultural land found in Section 179. He then turned to affordable healthcare premiums, noting Minnesota has the lowest in the country and called for pharmaceutical transparency. He then shifted to a discussion about the problems in the Department of Human Services and drew a direct connection to MNLARS.

In education, he called for closure in the Achievement Gap and “Real” School Choice and private vouchers, while also opposing the push for a Constitutional Amendment for education outcomes because it would create a liability for the state. Later, while noting concerns in Greater Minnesota about using public transit in the Twin Cities he emphasized increases in gang violence and public safety concerns and advanced an idea of considering a tie between this and LGA funding while also placing it first before Criminal Justice Reform. Finally, he addressed a bonding bill that reflects more recent ones of $825 and $988 million compared to the $2.5 billion being discussed by Governor Tim Walz (DFL-MN).

This showed his solid grasp of the wide range of topics his caucus is seeking to address in the bonding bill for the 2020 legislative session. Additionally, regarding the budget surplus he supports giving it back to taxpayers in some form of tax relief and there was a point made about his proposal for a license tab fee holiday.

One of the last questions asked was in regards to PolyMet and the decision by the lower court to deny two permits and he pointed out during the Polar Vortex last winter on 10% of the energy produced came from renewable sources and referred to radical environmentalists preventing jobs from Northeastern Minnesota.

Nearly, all of these issues are well spelled out on the Republican Caucus website.

It is always a good idea to know what the other side is interested in prior to the different sides being in the heat of the battle.