We received a mailing from the Republican Party of Minnesota sent out the registered voters list, which clearly shows along with the television commercials that have begun running, what the Donald J Trump (R) campaign intends to convey. They are trying to tie former Vice-President Joe Biden (D) to US Senator Bernie Sanders (I-ME) and Congresswomen Ilhan Omar (D-MN05) and Alexandria Ocasio-Cortez (D-NY14). In the mailer we received, it says, DON’T LET THEM TAKE OVER AMERICA.  On the other side it s claims, JOE BIDEN HAS EMBRACED THE POLICIES OF THE RADICAL LEFT:

We expect more of the same down the road, and we expect, this campaign might work in certain pockets, but in trying to stoke the anti-socialism fires here, might not be the best message. The DFL Party is a merger of the more pragmatic Democratic Party, which at the time was a third-party and the Farmer-Labor Party, which was Socialist. When they joined forces in 1944, they purged the Communists and started a long-term string of political successes. The Socialist trope may not find purchase here. 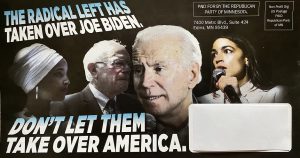 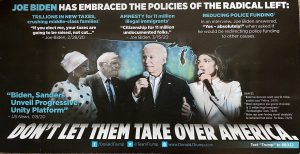