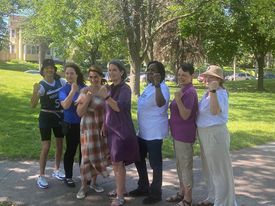 On Juneteenth, Smith and McCollum returned for the first celebration of the national holiday and attended Rondo Day, to commemorate the event, where they were joined by Governor Tim Walz (DFL-MN).

The heightened emphasis on a district like 65, shows the focus on the base vote and its concentration of population is key to statewide victories. The urban district may provide the base vote, but it is in the suburbs where the majorities in the legislature are won and lost. We were interested to hear candidates like Perez Hedges, actively discussing the diversity across the state and the pockets of communities of color, who can have significant impact on local races, in Rochester, Mankato, Willmar and Worthington.

It is regional centers like these that the DFL can maintain toeholds in Greater Minnesota. Especially, as a challenge against the influence of Donald J Trump.