The Scott Jensen (R-MN) campaign Twitter account is guilty of spreading a false narrative tying Congresswoman Ilhan Omar (D-MN05) to the Defund the Police movement, with a photoshopped sign in a picture. At a recent event, with Congresswoman Praymila Jayapal (D-WA07) and Attorney General Keith Ellison (DFL-MN) they took a group photo, and then someone who supports Jensen posted a changed picture where the Jamie Long for State House sign was replaced with a Defund the Police sign.

Granted, Omar did support the Minneapolis Ballot initiative to Replace the Minneapolis Police Department with a Department for Public Safety, which failed. The Defund the Police movement was originally embraced by many of the progressives, but the backlash and loss of Congressional seats across the nation, have been shifting the dialogue. 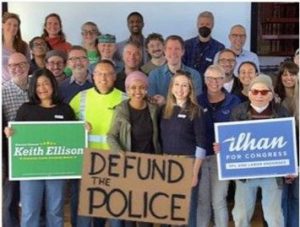 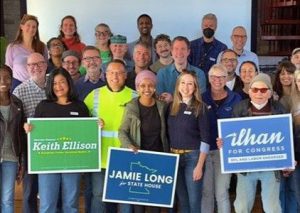