Does Trump Even Know What Antifa Is?

The outrage Donald J Trump (R), the self-declared Stable Genius, started when he twittered away about Martin Gugino being a “setup,” after the 75-year-old peace protester was shoved backwards by two Buffalo police officers and his head struck the pavement and blood began pouring from his wound, is unconscionable. The sheer lack of common decency and disgusting retorts from Trump only reinforce his lack of any social demeanor.

The constant screed emanating Diaper Don, our new moniker for Trump, based on Noel Casler’s the former staffer on the Celebrity Apprentice, statements having witnessed Trump snort Adderall and wearing adult diapers on Stephanie Miller’s Happy Hour Podcast, only goes to show how the inflated baby in diapers flown in England during Trump’s visit, is most apt for this impudent incompetent. 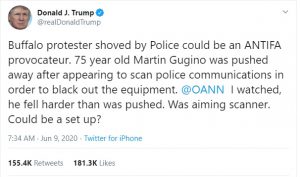 Then he further exasperated the situation, by advancing the idea Gugino is a member of Antifa. Again, we ask does Trump even know what Antifa means, it is a term applied to a loose association of Anti-Fascist groups opposed to right wing authoritarian groups, which Trump favors.

The fact, after the George Floyd murder, the following protests and then the memorial constantly drew attention away from Trump caused him to have a conniption and seek routes for regaining attention. This malignant narcissism is a lodestone for this presidency, me, me, me being the central focal point. Our nation will only be returned to some semblance of normalcy when this scourge is gone.

So much for a Stable Genius.