Today, Congresswoman Angie Craig (D-MN02) a suit to over turn the action by Secretary of State Steve Simon (DFL-MN). Article I of the US Constitution states “The Times, Places and Manner of holding Elections for Senators and Representatives, shall be prescribed in each State by the Legislature thereof; but the Congress may at any time by Law make or alter such Regulations, except as to the Places of chusing Senators.”

We expect she will prevail, and her campaign has been encouraging voters in the 2nd Congressional District to keep voting in her election on their Absentee Ballots. So this was expected. We wonder if Tyler Kistner (R-MN02) will join her in the case since he directly benefits from her mover. 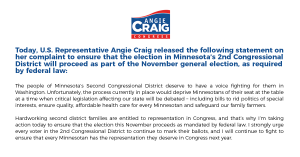