We went to the site of the Christopher Columbus statue and saw an individual squatting in his place. Doug Schiedel sat “Indian Style” atop the pedestal where Columbus once stood and was allowed to stay there by Capitol Police. He was asked by a State Patrol Officer how long he planned to remain in place and was given a bottle of water buy a police officer.

When we spoke with him, we learned he is an artist specializing in monuments and statuary. Maybe he was auditioning for the job to replace Columbus, but we doubt a statute of a elderly white man with a beard would be selected, they already have plenty of those in the Capitol Complex. 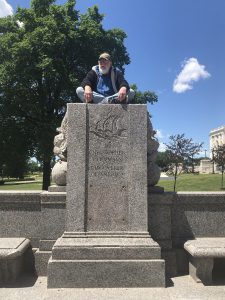