Big Fight in the Lowest Voting District in the State

The Eastside of St Paul has a rich history of immigrants and refugees’ communities, but also one adverse factor, its poor performance at the polls.  The Eastside Senate District 67 is not only the last district by number it is also determined by lowest voter participation. This means small blocs of voters can have greater impact in electoral contests. Therefore, historically, the DFL endorsement has held sway.

This election the contest for the Ramsey County District 6 seat is between candidates Mai Chong Xiong and Ying Vang-Pao, the daughter of General Vang Pao, an icon of the Hmong community who, facilitated the migration of his people to America. This is a race worth watching. The two Hmong women are running distinctively different campaigns and the Hmong Community is clearly divided and because of the limited experience with democracy, this race has been marked by several occurrences familiar with fledgling democracies, which include lies, deceptions and misrepresentations committed by the Chong Xiong side.

Despite being a late entrant, Vang-Pao has scored the endorsement of the outgoing Commissioner Jim McDonough (DFL-District 6), Ramsey County Sheriff Bob Fletcher, the St Paul Building & Trades, and the Minnesota Farmers Union and a slew of past elected officials. Chong Xiong carries the weight of current electeds, because they are slovenly following the DFL label, including Congresswoman Betty McCollum (D-MN04) who seems to have ignored the fact Chong Xiong and her principal supporter Councilmember Nelsie Yang (DFL-Ward 6) backed Amane Badhasso (DSA-MN) in the primary. This will cost McCollum votes on November 8th. Vang-Pao’s background in finance and business are clearly valuable assets.

In addition to the party endorsement, Chong Xiong is endorsed by the Take Action Minnesota, which many refer to as Take Credit Minnesota, and she has learned well from that organization and drank deeply from their well. As we documented in a previous Checks & Balances article, there are 11 claims she has made, which are at best huge overstatements of her involvement or even participation. Ramsey County District 6 Contest Marked by Overstated Accomplishments and Claims of Racism The most glaring is a claim she has made repeatedly, which is important to the Hmong Community, and that is securing funding for the Hmong Village Parking Lot. She did not play any role, the funding was secured before her boss, the controversial City Council member Dai Thao (DFL-Ward 01) was even elected. She also has the endorsement from the Democratic Socialists of America, an organization with the mission of replacing the Democratic Party, but what Hmong hear is Communists, just what General Vang Pao fought against.

She is also complicit with Thao for exacerbating the tensions within the Hmong community between White Hmong/American English speaking and Green Hmong/British English.

Originally, in the DFL endorsement contest, in which the participation was abysmal because of DFL Party Rules requiring a in person convention or a Zoom Meeting, but no hybrid, only 86 delegates of the 650 eligible attended. Then due to familiar floor games and a violation of an agreement made between the campaigns by Chong Xiong to have no endorsement, 41 people decided the endorsement.

We asked Vang-Pao why she decided to seek the position and filed late in the process, and we learned she decided to run based on the actions of Chong Xiong. As we understand, during Sen Foung Hawj (DFL-67, St Paul) endorsing convention, she stayed on the floor rather than join all the local leaders on stage to support his uncontested endorsement. She made a reference to the late General Vang Pao as almost endorsing her campaign, which disgusted Ying, and when discussing the office, she highlighted priorities to advance a radical social agenda rather than doing the job of a county commissioner.

If Vang-Pao had not decided to run, the race would be a cakewalk for Chong Xiong but now she must fight for it, and we hear she does not fight fair. This is a war in the community for it soul and purpose, one side (Mai Chong Xiong) distorts (lies, cheats, cajoles, misrepresents) and will not try to win honestly, but by any means necessary. This is the case where the liar might win, merely because she has the DFL endorsement.

We understand the fight is on and the Mai Chong Xiong camp might be breaking the law. The are claims from the Vang-Pao campaign of signs being stolen from locations by the other side. The report is as many as 50 signs have been removed from their placements, but this is happening due to pressure being applied to Hmong homeowners, business locations and other residents.

We are awaiting additional reports of signs gone missing due to the cover of night and the mischief of Halloween. We expect the crimes to have ratcheted up.

Now, for those of you who might remember Barbara Carlson’s last campaign for Minneapolis city council, she had an Andy Warholish lawn sign, which people took for the art quality. Well, the sign in question being poached is this.

Yes, we believe the Batman homage is intentional. We will submit there may be some people seeking new garage art, but if they would only wait until after the campaign 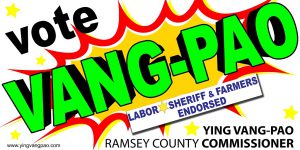