There is a motion for no endorsement pre-Primary, this is a simple majority motion. It passed.

As per the Rules.

f. If no candidate for endorsement has received sixty (60) percent of the votes cast after ten (10) ballots, a motion to have no endorsement will be in order at any time thereafter and will pass with a majority vote.

The is a motion to Suspend the Rules to allow three speeches one from the Co_Chair of the DFL Latino Caucus and the two remaining candidates to address the convention. The 2/3rd vote to Suspend prevails. The room voted affirmatively to let each speak.

After this ballot, all eyes will be on whether Metsa swings to Phifer, which is perceived as the weaker candidate in the Primary.

Metsa is addresses the delegates.

We are in the lower level conference room of the Holiday Inn, in Duluth MN. The convention is abuzz with rumors of the Leah Phifer (DFL) campaign is going to oppose Congressman Rick Nolan (D-MN08) from having voting privileges, which he is afforded by the Democratic National Committee. We’re waiting to see if this manifests. We do know at 10:30 pm last evening the Phifer campaign did meet with the Rep Jason Metsa (DFL-06B, Virginia) Campaign. This is seen as an indicator of a possible blocked endorsement strategy, especially since Phifer’s people went to Metsa and not the other way around. 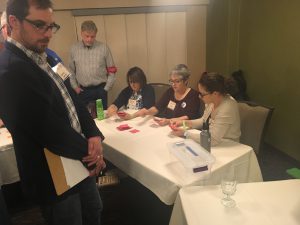 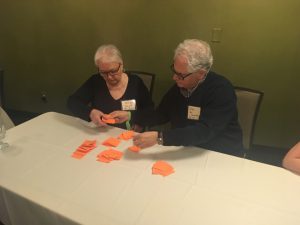 The significance Rules of the convention are the Drop Rule.

e. Candidates receiving less than (15%) will be dropped after the first ballot. On subsequent ballots, the drop off percent will be raised by (5%) each ballot. In addition, after the fourth (4th) ballot, the lowest remaining candidate will be dropped regardless of the percent. However, in no case will this drop off rule be used to reduce the numbers of candidates remaining on the next ballot to less than two. A vote for “no endorsement” is always in order.

Criticism of the Rules committee is it was stocked with Radinovich campaign. Right now there is a challenge to the Rules, to not allow the Drop Rule to be enforced until the 2nd ballot. The challenge clearly failed. Next, they are proposing to move the threshold percentage from 15% to 10%. This also clearly failed.

Based on our read of the convention the proposed rules will likely make the first ballot a contest between Radinovich and Phifer.

Here is a document that was handed out to the delegates as they entered the convention from the DFL Latino Caucus.

We, the Latino DFL Caucus, take seriously our job of advocating for Latino interests and policy positions within the DFL Party. We focus on increasing Latino participation within the DFL and advocate for Latino rights regardless of citizenship status to make the party and our state more inclusive.

It is because of our goals that we ask those of you in Congressional District 8 to stand with us against Leah Phifer’s candidacy.

Too many families have been torn apart at the hands of ICE and endorsing Leah Phifer, a former ICE agent who played a direct role in the deportation and separation of families, goes against the values of our party.

The DFL cannot afford to endorse a candidate with a history of breaking up families. Doing so would ostracize members of the Latino community and undermine its loyal support for the party.

We are asking you and the DFL to deny Leah Phifer an endorsement. We urge you to endorse a candidate in the race who can bring us together – our party is strong because of our diversity.