Klobuchar Starts to Make a Move in Presidential Campaign

Many people who support US Sen Amy Klobuchar’s (D-MN) Presidential bid have been waiting for her to do or say something different than she has been prior.  While sitting at either a single or double-digit in nearly all polling, she hasn’t seemed to have had any impact. Her numbers reflect a lackadaisical, uninspired effort and we have been saying this for months. The main thing missing from the debate was any real criticism of the incumbent Donald J Trump (R).

Last night, she took a slightly different tack and appeared to score points against US Sen Elizabeth Warren (D-MA), who bested Klobuchar better than two-one at the DFL State Fair booth in their soybean poll. The problem is the performance was again not overly inspiring as the two discussed the differences in their Health Care proposals it was like listening to a debate between a theoretical economics professor (Warren) versus an applied economics professor (Klobuchar). 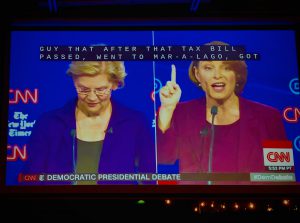 As Klobuchar called out Warren for her lack of practicality or pragmatism, she made her seem a bit Pollyannaish but didn’t score any mortal blows. If a pie-in-the-sky approach is all she can be criticized for then those who have no understanding of economics might think what she says is plausible.

The real issue for Klobuchar is whether or not she can scrape away supporters from any other candidate or not. She needs to be seen as a viable alternative to what is currently offered.

The addition of billionaire Tom Steyer and a continued rise in the interest of businessman Andrew Yang puts Klobuchar as just another regularly flavored ice cream always on the menu rather than a specialty or the flavor of the month. Where is the pizzazz?

During last night’s debate, she missed a perfect opportunity to use her own history to differentiate herself from the field. When the conversation focused on the loss of jobs in Ohio and the adverse impact of Trump’s trade policies on agriculture, she easily could have offered up the following “In Minnesota, our Democratic Party has a unique name, it’s the Democratic-Farmer-Labor Party, since 1944 we have incorporated the concerns of Farmers and Labor into all of our political conversations in Minnesota, and I am glad my fellow Democrats and Bernie Sanders are getting on board where I have always been.” Had she made a statement like this she would have sent a clear message throughout Ohio and over to Iowa that she is the Farmer and Labor’s candidate and making it clear Sanders is not a Democrat.

With twelve candidates on the stage, it is hard to distinguish one from the other and if the intent is to create a comparison and a contrast it’s important for Klobuchar to show she is different with a distinction.