Ever since the tax policies advanced by the DFL majorities in both houses of the legislature, during the 2013-14 legislative session, and then signed by Governor Mark Dayton (DFL), the state of Minnesota has experienced surpluses and projected surpluses continue. This is a far cry from when Republicans controlled the state house and the Governor’s seat under Tim Pawlenty (R) when the opposite effect of deficits became the rule.

Yesterday, we learn the state’s revenue forecast is $1.871 billion, of which a portion, $665 million, must be allocated to the Budget Reserve $594 and $71 to the Environmental funds. Part of this surplus resulted from the $865 million left unspent during the last legislative session. This means the state will have additional monies to allot to a varied of programs, tax cuts, and other activities. It is important to remind readers a tax cut is a diminishes revenue called tax expenditures.

The Revenue Forecast recognizes structural deficits in our projected workforce, which is aging, and there are fewer people entering the workforce to make up this shortage. Also, there are additional pressures on the future economy due to weaknesses in the agricultural economy and the mining industry. These will cause lower revenues in future years.

Dayton is calling for an application of the surpluses in a measured fashion. He would like to peg any tax reductions to additional support for education spending. This is met with skepticism by Senate Minority Leader David Hann (R-48, Eden Prairie) who states money for education has yet to reduce to the achievement gap.

During the Republican response to the Revenue Forecast, House Speaker Kurt Daudt (R-31A, Crown) renders the old Republican saw: If people had more money in their pockets they would know how to spend it better than government.

All of this information provides an interesting setting as a backdrop to the overall political posturing coming into the 2016 legislative session. Granted, we will need to wait for the next Revenue Forecast in March to know what the final numbers will be, and we expect the total to exceed $2 billion, which will only ratchet up the arguments pending a November election.

In advance of the Revenue Forecast, the House DFL issued a press release calling attention to November 27th fundraising letters signed by Daudt and sent into districts Republicans won during the last election. Additionally, the Minnesota Jobs Coalition also sent letters into these swing districts. Remember, Republican Executive Director Ben Golnik worked for during the Minnesota Jobs Coalition during the 2014 election; show the schizophrenia of the Republican Coalition. Of course, there isn’t any coordination between the GOP Caucus and Independent groups, wink, wink.

In their literature, the Minnesota Jobs Coalition highlights votes by freshmen members on projects they support; in turn Republicans, especially, the leadership, hope this attention will retain these members in office. In their mailer supporting Rep. David Baker (R-17B, Willmar), who defeated Rep. Mary Sawatzky (DFL) by a mere 214 votes. The Coalition extols Baker’s vote “for” transportation funding, which is not clearly identified but is intended to provide the impression to his district that he supports transportation jobs. Here is the actual mailing. 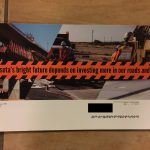 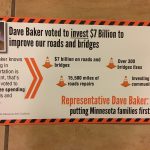 Republicans recognize they have a far steeper climb to gain or retain seats in swing districts during  Presidential elections. Higher electoral turnout does not bode well for retention of seats obtained in 2014, and hence why their entire focus this next legislative session will be on political issues-oriented toward their own supportive constituencies rather than the general well being of all Minnesotans.

Taking a quote from Daudt’s fundraising letter, “The House GOP majority believe that government spending needs to be stopped in its tracks and then, yes, dramatically reduced. Hard-working Minnesotans are struggling to make ends meet. And, House Republicans are going to hold the line to help them out.” We find this rhetoric interesting as the House GOP leadership attempts top self-define. When Daudt’s says “We’re leading both assertively and smartly on policy, advancing conservative principles such as protecting unborn and Second Amendment rights to promoting tax cuts and eliminating bureaucratic red tape so businesses can thrive and expand.”

Here is the entire letter.

We wonder if these sentiments are expressed by Daudt stem, in any way, from this trailer parked at the onset of his legislative district and sitting on Highway 65. The Tea Party of MN is attempting to shape the impressions as well and it is unclear if the right-hand knows what the far right-hand is doing, or vice-versa. Looks like the overall statement is No Daudt. Hmmm, sounds like a band. 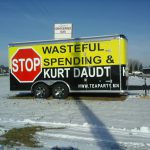 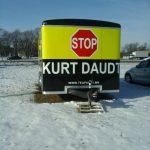